Nigeria, Africa’s largest economy, saw a decline in the number and value of deals last year with regulatory uncertainty, falling oil prices and weakening of the naira all contributing to investor caution in the mergers and acquisition space in the country, a report by Mergermarket shows.

Overall, Africa is seeing the number of M&A transactions going up, albeit at declining values, with investors choosing to buy into smaller, mid-market companies rather than make deals above the $500 million mark. 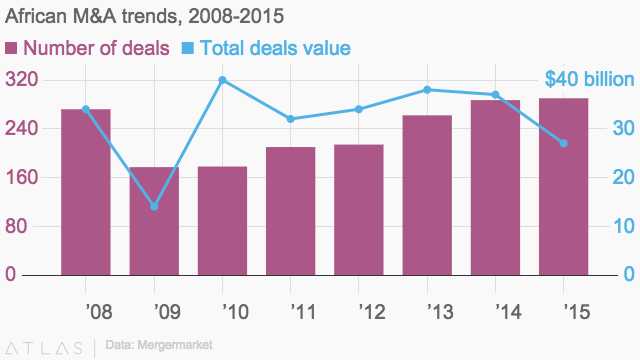 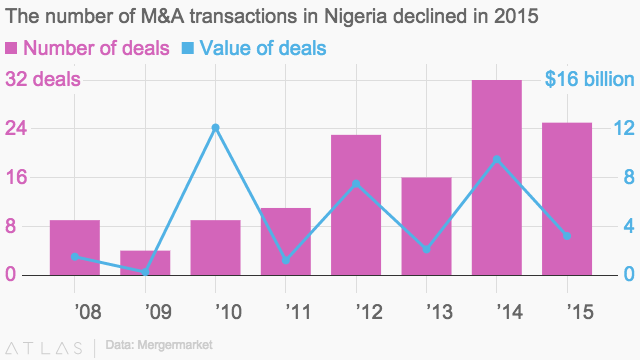 The weakening of the naira, analysts say, made investments outside Nigeria more expensive, deterring companies from making deals outside the country.

“Nigeria has been facing some challenges with exchange rates and clamors for devaluation, so we’re probably not as competitive when it comes to outbound deals,” Afolabi Olorode, head of financial advisory and equity capital markets at FBNQuest, a Nigerian-based bank, told Mergermarket.

This has forced investors to look for deals at home. In 2015, nearly half of M&A deals in Nigeria were domestic, with a total value of $1.5 billion. The local energy sector was active, where big energy companies such as Shell and Chevron sold some of their assets to domestic players such as Seplat Petroleum and First Exploration and Petroleum Development Company.

Meanwhile, despite the worldwide drop in the price of oil—a bedrock of Nigeria’s economy, contributing 70% of its revenues—natural resources continue to dominate investor interest in the West African country. Close to a third of the deals that took place in 2015 involved the sector.

But there is some indication that investors are also looking for deals in other areas of the economy, such as in tech and consumer markets, the report shows, reflecting a wider M&A trend on the continent. 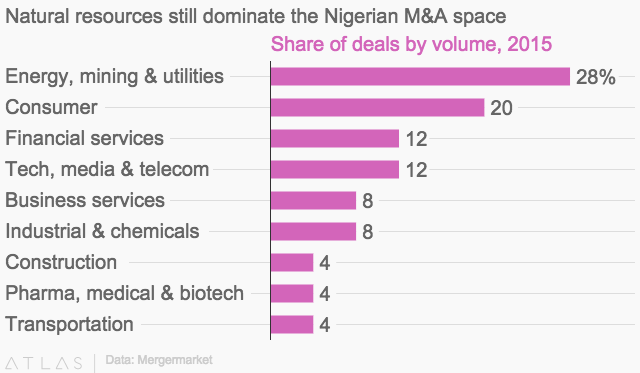 Despite regulatory uncertainty—especially following the $5 billion fine imposed on the South African telecom giant MTN, which is close to being settled—analysts are bullish about the prospects for Nigeria’s M&A space in 2016.

“This year should be much better,” Olorode said. “Last year investors were hesitant due to risks associated with the election and the volatility of the naira. We could see an increase of as much as 50% in deal volume.”