Skip to navigationSkip to content
This story was published on our Quartz Daily Brief newsletter, The concise, conversational rundown you need to start your day.
By Morgan Haefner & Hasit Shah
Published November 10, 2021

Was this newsletter forwarded to you? Sign up here. Forward to the friend who was sad Quibi didn’t last.

The first draft of the COP26 agreement is out. Two days before the end of the climate summit in Glasgow, the preliminary deal calls for more intense emissions-cutting measures by the end of 2022.

General Electric is splitting into three companies. The new units—focusing on healthcare, aviation, and energy—will be publicly listed, and the breakup shows how difficult it is for large conglomerates to remain viable.

Electric-vehicle maker Rivian is expected to go public today. The Amazon-backed company has yet to turn a profit, but after pricing shares at $78, it is valued at $66.5 billion.

The US will spend $17 billion to update its ports and waterways. According to CNBC, $4 billion will go towards supply chain holdups within the next 60 days. The $1 trillion infrastructure bill also makes crypto tax-reporting failures a felony. 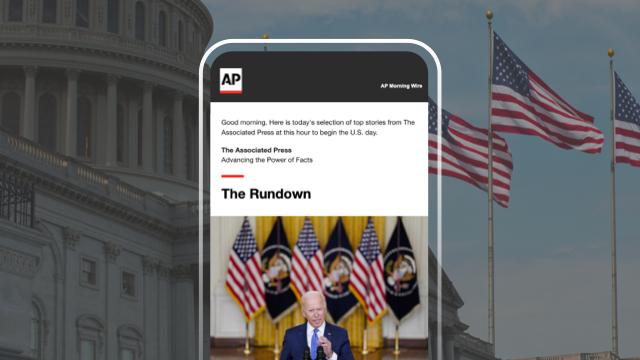 Learn from a leader: The AP’s strategy for online success. Get Sailthru’s new case study to learn how The Associated Press, the largest and oldest newswire service in the US, enhanced engagement and boosted revenue with personalized email newsletters that delivered a new and improved subscriber experience.

Starting today, union ballots will be mailed to Starbucks baristas at three coffee shops in the Buffalo area of New York. They will vote on whether to establish the first-ever unionized corporate-owned Starbucks locations in the US. The ballots are due Dec. 8, with the vote count the following day.

1.2%: Share of employees in the US food and services industry that are union members

11.5 million: Employees in the US foodservice and restaurant industry, about 6.5% below February 2020 levels

1: Corporate-owned Starbucks store that is unionized in Canada

2: Number of previous union campaigns the company has faced in the US, including in the early 2000s in New York and in 2019 in Philadelphia

$15: The minimum hourly wage for Starbucks workers by next summer

~80: Starbucks workers who are eligible to vote in the Buffalo election

Seoul is joining the metaverse

On Nov. 3, Seoul announced a plan to make a variety of public services and cultural events available in the metaverse, an immersive internet that relies on virtual reality. The metropolitan government will develop its own metaverse platform by the end of 2022. By the time it is fully operational in 2026, it will host a variety of public functions including a virtual mayor’s office, as well as spaces serving the business sector; a fintech incubator; and a public investment organization.

The 3.9 billion won ($3.3 million) investment is part of mayor Oh Se-hoon’s 10-year plan for the city, which aims to improve social mobility among citizens and raise the city’s global competitiveness. It taps into South Korea’s Digital New Deal, a nationwide plan to embrace digital and AI tools to improve healthcare, central infrastructure, and the economy in its recovery from the economic crisis caused by covid-19.

Meanwhile, Facebook’s rebrand to Meta was just the latest step in the company’s pivot to the metaverse. A close look at Facebook’s slew of VR acquisitions hints at what it thinks the future will look like:

🎮 The company has snapped up five VR game studios in the last three years alone. In June, it bought BigBox VR, the studio behind Population: One, a.k.a. “the Fortnite of VR.”

👯 All of the studios emphasize multiplayer games. Meta also sees the promise of social VR in Supernatural, a workout app with a strong Facebook community, which it bought a day after the company rebrand.

🤳 Facebook is beginning to invest in user-generated content for metaverse-related purposes. It announced a $10 million creator fund for Horizon, its social VR world, in October.

✦ Try a Quartz membership free for seven days to get a full week of our member-only content.

Quartz announcement
Are your teammates bringing their authentic selves to the office? Many organizations are encouraging employees to be their full selves in theory, but how are they preparing managers to handle it in practice? In just an hour, our five experts will show you how to create policies, norms, and management approaches that acknowledge the breadth and nuances of your employees’ lives while still staying focused on the needs of the business. Listen in and ask questions live at our next Quartz at Work (from anywhere) workshop on Wednesday, November 10, at 11 AM ET, sponsored by SAP SuccessFactors. Register here.

Our panel will show you how to navigate this new expectation for managers and how that shift shows up in company culture, including Register today.

📱 Netflix has a plan to prove Quibi wasn’t wrong

Heinz can now make ketchup on Mars—in theory. The food maker used tomatoes grown in soil similar to the red planet’s to make the condiment.

Earth’s first continents are much older than we thought. Rock sediments show the continents rose out of the ocean more than 3 billion years ago—700 million years earlier than previously dated.

London cabbies’ brains may shed light on Alzheimer’s disease. Researchers are interested in how drivers remember routes on about 26,000 streets.

Hangovers: There’s an ancient amethyst ring for that. At least that’s what archeologists think a purple jewel, found at the site of the Byzantine era’s largest winery, was used to prevent.

Our best wishes for a productive day. Send any news, comments, extraterrestrial produce, and ancient hangover cures to hi@qz.com. Get the most out of Quartz by downloading our iOS app and becoming a member. Today’s Daily Brief was brought to you by Hasit Shah, Michelle Cheng, Camille Squires, Jasmine Teng, Liz Webber, and Morgan Haefner.