Was this newsletter forwarded to you? Sign up here. Forward to the friend who still won’t watch The Exorcist.

Shanghai is locking down. Tesla suspended production in the city, and most businesses are closing in two phases, as covid cases spike.

Will Smith slapped Chris Rock on stage at the Oscars. He was defending his wife over a baldness joke, and then won the award for best actor.

An Apple movie won best picture, while a Netflix film won the directing award. Here’s a complete list of winners and nominees.

Huawei announced its first-ever annual revenue decline. The Chinese tech company’s revenue fell to nearly $100 billion in 2021, a 28.5% drop from 2020, as US sanctions against the firm bite.

Ukraine’s “territorial integrity” cannot be compromised, its president says. Peace talks with Russia are taking place in Turkey this week.

Joe Biden proposes a 20% minimum tax on the richest Americans. It would affect households that are worth more than $100 million.

Normal trading of shares and bonds will resume today on Russia’s stock market during a shortened time window of 9:50am to 1:50pm Moscow time, the Russian central bank confirmed (link in Russian). However, non-residents will still be unable to trade or sell stocks and bonds until April 1.

Russia’s stock market reopened to limited trading last Thursday, with only 33 stocks available, after being closed for about a month. On Feb. 24, the day Russia invaded Ukraine, the Moscow stock exchange (MOEX) plunged by 33%. Soon after, the ruble dipped to a record low against the dollar.

Ongoing peace talks have stoked optimism that the conflict may soon end, but the Russian stock market, worth about $400 billion, remains in a fragile state even as trading resumes.

Does the US have gas to give?

Europe has a Russia-sized hole in its natural gas supply, and the US wants to help fill it. The US agreed to give the EU another 15 billion cubic meters of liquified natural gas by the end of this year.

It’s a nice political gesture, but the US liquified natural gas exports are maxed out. In February, US gas exports hit a record of 13.3 billion cubic feet per day, the first time that all seven terminals in the country were fully docked by tankers at once.

It takes years to build new export infrastructure, so it’s not clear how the US can meet its near-term promise to Europe other than asking customers like China and Japan to resell some of their American liquified natural gas to Europe. Long-term, European buyers are already signing advance contracts with the US.

As Europe shifts away from Russian gas, whether through imports or renewables, any reliance on burning fuel will mean more carbon emissions—which countries increasingly want to track. In the US, companies face new rules to disclose their climate change risks. But the biggest gold rush could be for climate accountants. ✦ Try membership free for a week to read our predictions on this trend and more. 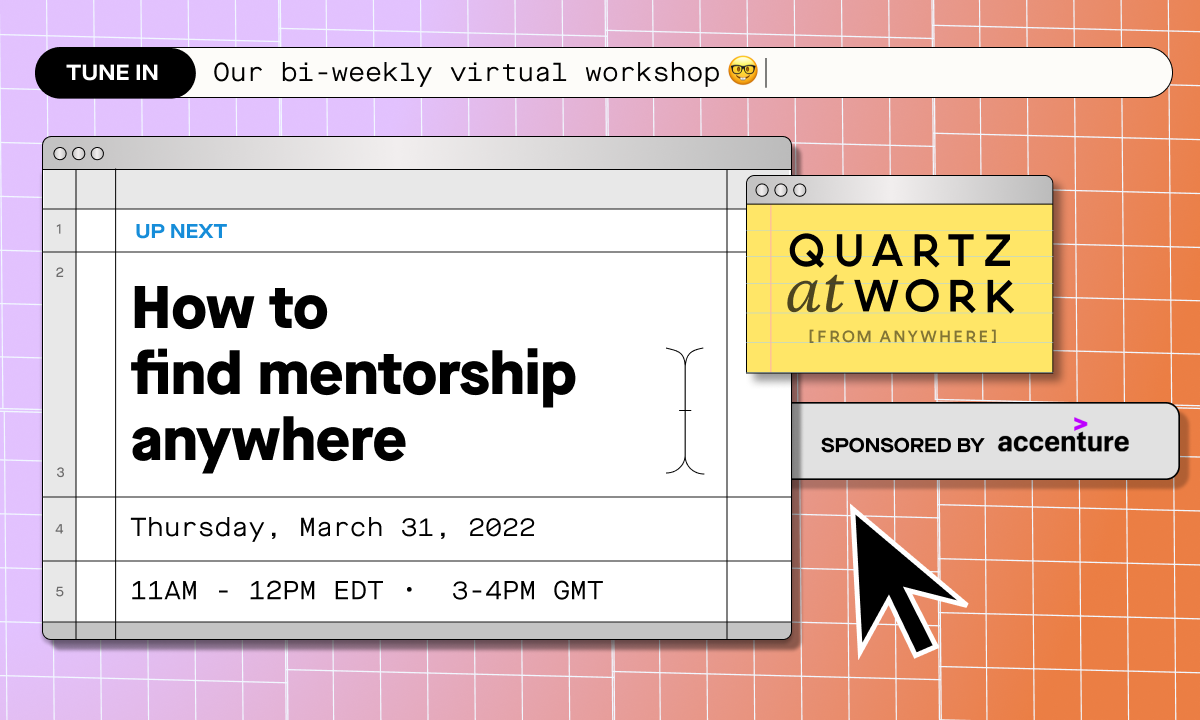 Are you searching for guidance to help you take your work and your career to the next level? Register for free for How to find mentorship anywhere, next up in our Quartz at Work (from anywhere) series. Join us Thursday, March 31, 2022 at 11 am - 12 pm EDT (3-4 pm GMT) and hear from our speakers: Sponsored by Accenture
Register for free

🏆 The story of Diane Warren and her 13 Oscar nominations

To live in the Blue House or not. South Korea’s incoming president doesn’t want to call the traditional residence his home.

A dual covid-flu diagnosis can double the risk of death. Scientists said covid patients should routinely be tested for influenza.

An ice shelf the size of New York City collapsed in Antarctica. It’s the first time an event like this has been recorded in human history.

Sean Penn insisted that the Oscars invite Zelenskyy to speak. The actor, who has been in Ukraine and Poland filming a documentary, said he’d “smelt” his awards if this didn’t happen.

Speed 2: Cruise Control was a bad movie, right? Well, the reviews were harsh, but it grossed $48 million at the box office. What, then, are the markers of a bad sequel? The latest episode of the Quartz Obsession podcast has some ideas.

Our best wishes for a productive day. Send any news, comments, colorful homes, and melted Academy Awards to hi@qz.com. Get the most out of Quartz by downloading our iOS app and becoming a member. Today’s Daily Brief was brought to you by Hasit Shah, Tim McDonnell, Adario Strange, and Morgan Haefner.