For the past few weeks, India has been transfixed by news linked to Assam.

No, not by the sweeping devastation by incessant rains and massive flooding in northeast India’s biggest state, but by the unending machinations of the Indrani Mukerjea-Sheena Bora case (Mukerjea is from Assam).

The fact that over 50 people have died and 1.5 million impacted in Assam’s latest floods wasn’t enough to unsettle the rest of India. The distressing images coming in from the state have not exactly inundated social media feeds, and there aren’t any heart-wrenching status messages written for the millions displaced.

But here is why you should care: Four rivers were flowing above danger levels as of Sept. 08, according to the Assam State Disaster Management Authority (pdf), with 17 districts and some 1,276 villages affected. About 92,820 hectares of crop area has been hit. In all, 241 relief camps and centres have been set up, with 92,806 people already seeking refuge.

But floods are nothing new to Assam. According to the state’s water resources department, the vast network of rivers—the Brahmaputra and Barak rivers have more than 50 tributaries—primarily causes floods during monsoons.

Almost 40% of the total land area in the state is flood-prone.

Here is how the population has been affected in the last few years because of floods: 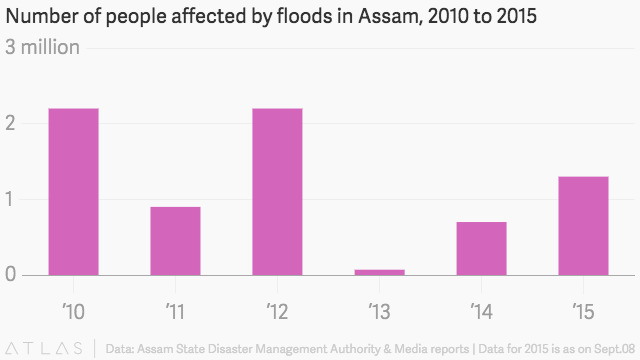 “The flood and erosion problem of Assam is singularly different from other states so far as extent and duration of flooding and magnitude of erosion is concerned and is probably the most acute and unique in the country,” Assam water resources department notes on its website.

Such regular flooding should mean that the Assam government would have the means to deal with a current crisis. But chief minister Tarun Gogoi claims he doesn’t have enough resources to deal with the four waves of flooding that have swept the state this year.

“We need urgent assistance and relief materials for the flood-affected people from the central government. We have exhausted all our limited resources. We are in a helpless situation,” Gogoi told the Thomson Reuters Foundation.

Here are some pictures from Assam, over the past few weeks.