Back in 2009, when Shree Renuka Sugars made the first of its two major Brazilian acquisitions, it marked the coming of age of a company formed just a decade before. It was also the first global purchase by an Indian sugar company.

Now, it is all falling apart.

On Sept. 29, Shree Renuka Sugars—founded by the mother-son duo of Vidya and Narendra Murkumbi in 1998—said that its Brazilian subsidiary has filed for bankruptcy protection in the country.

Shree Renuka Sugars is one of the largest sugar producers in the world, and perhaps the first Indian victim of the Brazil’s ongoing economic maelstrom.

In a statement to the BSE (pdf), the company said that Shree Renuka do Brasil Participacoes Ltda (SRDBPL) together with all of its subsidiaries—collectively known as Renuka Brazil—has filed for protection under judicial recovery at the designated court in Sao Paulo.

“Shree Renuka Sugars believes that re-organisation under judicial recovery is the best way to re-organise, protect our Brazilian subsidiaries and provide a path to our eventual turnaround in Brazil,” the statement added.

The main reasons for the crisis at Shree Renuka, according to experts and the firm, is a depreciating real, the country’s currency—thanks to a slowing economy—and the drought that has engulfed Brazil’s sugar market.

Brazil faced a severe drought in 2011 and then again in 2014. Together with falling sugar prices over the last two years, Renuka do Brasil’s cash-generating ability has been negatively impacted, the company said in a statement.

Sugar prices globally have been spiralling downwards for the last few years. In August, global raw sugar prices dropped to 10.13 cents a pound—the lowest in seven years, Reuters reported. The main reason for this fall is an excess supply globally.

The stormy economic climate in Brazil, the world’s largest producer and exporter of sugar, is making the situation worse. The country is grappling with a high budget deficit, increasing unemployment and a rising inflation. In 2015, the gross domestic product (GDP) is estimated to shrink by 0.9%, according to government projections. And its recent sovereign rating downgrade to junk by credit rating agency, Standard & Poor’s, could worsen the situation.

Meanwhile, the country’s currency has also taken a dive. The Brazilian real has depreciated over 30% in 2015 against the US dollar. That’s quickly ballooned the dollar debt on the Shree Renuka’s books in Brazil.

An analyst with a domestic brokerage firm in Mumbai said that the exchange rate fluctuation coupled with the drought have hit the company hard.

“They faced difficulties in 2011, but in 2012 they increased their stake in the Brazilian units thinking it was short-term, but now things have worsened,” he said, requesting anonymity due to compliance issues.

These conditions have made Shree Renuka’s debt “unsustainable”, the company told Bloomberg. The company forwarded the BSE statement in reply to an email from Quartz seeking more details.

The Brazil debt troubles though don’t have any exposure to Indian banks, Narendra Murkumbi, vice chairman and managing director told CNBC TV-18 news channel. ”The loans are with all the Brazilian banks; there is a small exposure from the Export-Import (EXIM) Bank of India,” he said.

Shree Renuka Sugars started out in 1998 by acquiring a loss-making sugar mill—Nizam Sugars Ltd—in Andhra Pradesh through loans and equity contribution from farmers, thereby making them shareholders in the firm.

Over the next decade, the Murkumbis set up some six new sugar mills across the country. But the big move came in late 2009 when the company decided to venture into Brazil. Between November 2009 and July 2010, Shree Renuka bought out two sugar companies—Vale Do Ivai SA Acucar e Alcool and Equipav—in Brazil for a combined $332 million. Back then, the two companies also had a combined debt of $970 million.

But the acquisitions cost Shree Renuka dearly. Since 2014, the company’s profit’s have dried up and and swung to losses, mostly due to increased expenditure and interest costs. In March 2015, the company reported net loss of Rs295 crore ($45 million) on revenues of Rs5,744 crore ($876 million).

In July this year, credit ratings agency India Ratings and Research, a unit of Fitch Ratings, downgraded the credit rating of Shree Renuka and put it under a negative outlook.

“The downgrade reflects the substantial deterioration in SRSL’s consolidated credit metrics for the third consecutive year in the 2015 financial year,” the agency said in a release.

“This was due to a continuous decline in its sugar segment profitability and consistently high debt levels,” it added. In the 2015 financial year, the company had a total debt of Rs9,160 crore ($1.4 billion), according to India Ratings.

Shree Renuka isn’t the only one to bet on Brazil’s once thriving economy in the past.

Indian companies have been stepping up their play in the South American economy for the last few years. Information technology companies such as TCS, Wipro, and Infosys, pharmaceutical company Cadilla, automaker Mahindra & Mahindra and infrastructure firm, L&T have also set up shop in Brazil.

Total investments by Indian companies in Brazil is around $5 billion (Rs32,762 crore), according to the Indian embassy in Brazil.

Here’s how trade between India and Brazil has grown in the last few years: 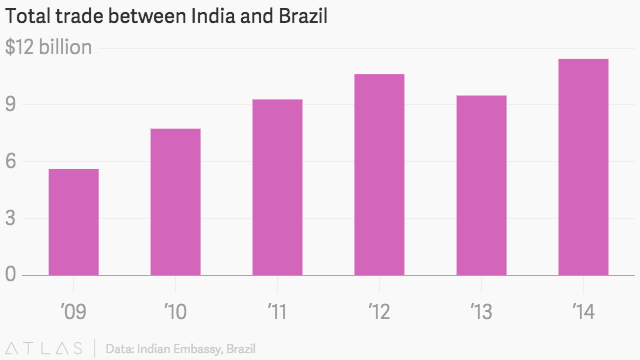 But with the Brazilian economy in free fall, some Indian companies may be left with a bitter aftertaste.