Back in February, the Modi government had announced a massive Rs69,500 crore ($10.7 billion) disinvestment plan—essentially, selling the government’s stake in public sector units—for the 2016 financial year.

With around five months to go, it has only managed to earn about Rs12,700 crore ($1.9 billion) from four share sales, and the government has now admitted that it won’t meet its target.

“One of the reasons why the divestment process is challenging right now is because many of the companies we are considering for divestment are in the commodity industries,” Jayant Sinha, minister of state for finance, said on Oct. 27.

“Whether it is Coal India or OMCs (oil marketing companies) and so on… They are impacted by global commodity prices,” he added.

The disinvestment exercise is important because the proceeds help keep India’s widening fiscal deficit in check. That has been difficult in recent years because of tepid economic growth and benign tax collections. A fiscal deficit arises when the government’s expenditure exceeds the revenue.

For the 2016 financial year, the government has set the fiscal deficit target of 3.9% of the GDP (gross domestic product).

“The Rs69,500 crore disinvestment target was over-optimistic, and we had said earlier that at best only Rs30,000 crore can be met,” Devendra Kumar Pant, chief economist and senior director of public finance at India Ratings and Research, a credit rating agency, told Quartz. “However, the fiscal arithmetic of 3.9% is not in danger.”

“There has been a shortfall from disinvestment, but there is also a windfall from indirect taxes and non-tax revenues,” he explained.

Since 1992, only two governments have been able to meet the disinvestment targets. But the Modi government was perhaps being too ambitious when it set itself such a massive goal, and then repeatedly expressed confidence that the target would be met.

Here is India’s disinvestment performance for the last few years. 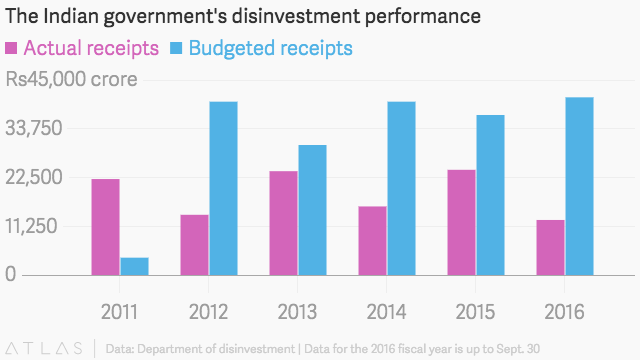 The other components of the government’s revenue would make up for missing the disinvestment target. For instance, a low import bill—thanks to falling oil prices—dividends from states and funds from the telecom spectrum auctions will help the government plug the gap.

Currently, tax collections lag estimates but non-tax revenues are up 36% year-on-year between April and August 2015, Radhika Rao, an economist at the DBS Bank, estimated.

“These collections were also buoyed by a record jump in the Reserve Bank of India’s surplus transfers to the government, up 22% from a year before. Dividends from state-owned companies are also expected to add to this kitty along with spectrum inflows,” she said in a note.

Modi has not had timing on his side either.

The largest share sale for the year hit the bourses when the equity markets were reeling under the after-effects of the huge sell-off in China. The government earned around Rs9,300 crore on Aug. 24 when it sold 10% of its stake in Indian Oil Corporation (IOC).

Right now, stake sales in companies including Coal India, NTPC, Bharat Electronics, Engineers India, National Aluminium Co and Hindustan Copper, are in the works. Almost all of these companies have operations that relate to commodity prices like oil and coal. Falling prices of these commodities means lower revenues, which are unlikely to attract investors.

“Obviously, we have to ensure that we get the best possible valuation for these valuable enterprises,” Sinha said.

But luck hasn’t favoured the government, and there is little that it can do now, except wait.