This week, Coffee Day Enterprises, which runs India’s largest cafe chain, got listed on the two major stock exchanges—the National Stock Exchange and the BSE. On Oct. 27, it was the turn of InterGlobe Aviation, which owns IndiGo Airlines, to launch its IPO.

These listings have taken a while to arrive because the last few years provided limited opportunities to investors to park their funds in new companies. Frustrated by lacklustre economic growth, India’s IPO market was in a deep slumber.

But with the new government in place, equity investors in the country have been betting on positive sentiment. The Sensex—India’s benchmark index—touched an all-time high in March and has been performing steadily since. Companies, as a result, are taking advantage of this renewed investor confidence and using the opportunity to tap the market for funds. 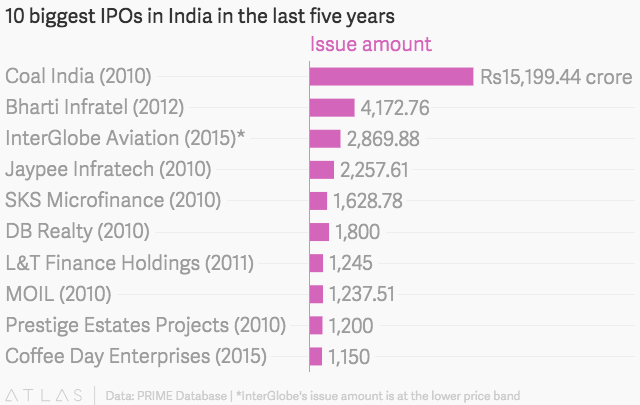 IndiGo has been the star performer in India’s ailing aviation sector. In fact, it is one of the only two major airlines that made a profit in the 2015 fiscal year.

The company had declared a price band of Rs700 to Rs765 per share for offer. The subscriptions were at the upper end of this band, signalling the willingness of investors to pay more in hopes of higher returns. But, retail investors only displayed lukewarm interest in the IPO.

“There has been a drought in the IPO market for a very long time. You’ve not had any good brands at all. Both of these requirements are met with Café Coffee Day and IndiGo. Even then, the retail interest is slow. A retail investor probably comes in when they see successful listing for two to three such IPOs,” Jayant Manglik, president, retail distribution at Religare Securities, told the Mint newspaper.

Meanwhile, questions persist whether IndiGo can sustain these high valuations, once listed. Those doubts were bolstered by Coffee Day’s recent experience: Although the IPO was subscribed 1.8 times, it made a weak debut with its shares tanking about 18% on the BSE.