Bihar has voted and, despite everything that the Bharatiya Janata Party (BJP) poured into the campaign, the Nitish Kumar-Lalu Prasad Yadav combine has decimated the Narendra Modi-Amit Shah challenge.

From caste, cows and copious money, much had been said and written about the sparring between the Mahagathbandhan (MGB)—comprising Kumar’s Janata Dal-United (JDU), Lalu-led Rashtriya Janata Dal (RJD) and the Congress party (INC)—and the BJP’s National Democratic Alliance (NDA) in the run-up to the polls. But the results data tell a story in themselves.

In the 2014 general elections, the BJP dominated Bihar. Just looking at the Lok Sabha results (and not factoring in an alliance) the NDA lead in 172 assembly constituencies, compared to the JDU, RJD, and INC’s 64 seats. But the moment the MGB alliance is factored into the 2014 election results, the picture reserves. If we were to add the individual vote shares of JDU, RJD, and INC in 2014 Lok Sabha results, assuming that the alliance partners transfers all of their votes to their partners, the RJD, JDU, and INC combined would have won 146 assembly seats.

In 2015 assembly elections, the MGB exceeded even that estimate, and managed to win 178 seats.

This demonstrates that the MGB and its political strategists created and maintained a perfect alliance. In addition to consolidating their votes, their campaign also managed to persuade a significant section of voters—who didn’t vote either for the JDU, the RJD, or the INC in 2014—giving them an additional boost of 32 seats. 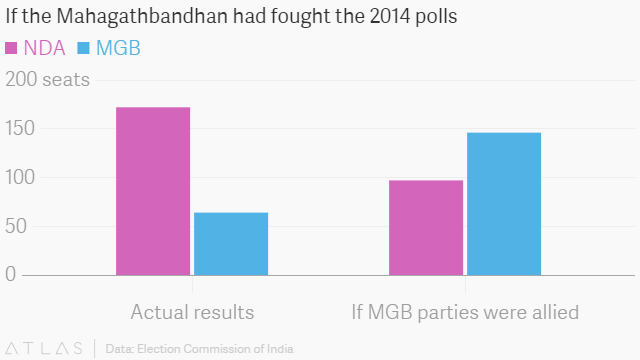 The mandate given in Bihar is much more decisive for the MGB, compared to what the NDA secured in 2014.

During the Lok Sabha elections, nearly 44 assembly segments were won by a margin of victory of less than 3%. This reflected a close contest between parties, compounded by a tripartite struggle between the RJD, the BJP and the JDU. In 2015, however, only 29 seats were won by such a close margin.

In fact, even in the seats that the BJP has won, its victory margin at 7% is almost half of the RJD and the JDU’s victory margin of 13% and 13.6%, respectively. This is especially significant for a state election that reportedly did not show overwhelming support for any particular candidate and was too close to call till the last day. 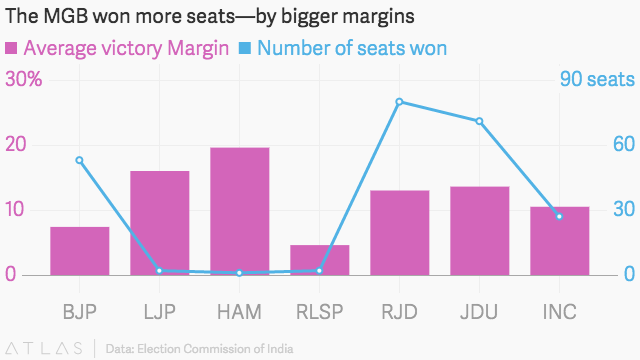 The often discussed BJP strategy was to create a broad coalition of castes, to challenge the electorally potent ECB (extremely backward class), Yadav, Muslim combine of the MGB. However, it may have overestimated the capacity of its alliance partners to achieve this goal. After all, the Lok Janshakti Party (LJP), the Rashtriya Lok Samta Party (RLSP) and the Hindustani Awam Morcha (HAM) together managed to convert only five of the 86 seats allotted to them.

If all of Bihar’s 243 seats are analysed in four categories in terms of the BJP’s foothold—i.e. safe, favourable, battleground and difficult—it becomes clear that the allies were left to do the heavy lifting. Out of the 86 allocated to the alliance partners, around 66 were the difficult seats.

The strategy stemmed from a belief that the backward community parties would attract its core backward communities, i.e the Paswans of the LJP, Mushahar of the HAM, and the Kushwahas of the RLSP. This, in turn, would signal the BJP’s willingness for a broader social alliance, shedding its upper caste tag. Coupled with the BJP’s development focused campaign, the idea was to attract non-traditional BJP voters to the NDA. But the plans went awry when the NDA alliance partners had a strike rate of zero in the challenging assembly constituencies.

In the 2014 Lok Sabha elections, the alliance partners won handsomely because the BJP was able to transfer votes to its allies. The result was that the LJP won six out of seven seats and RLSP won all three seats it contested in 2014. This time, in the 15 relatively safer seats given to the alliance, the BJP could ensure success in only five seats for its partners

With the great benefit of hindsight, it is clear that the BJP campaign was in trouble from the get-go. The party did not manage to convert even one of the 10 BJP-leaning seats in the first phase. This included traditional upper caste dominant areas such as Lakkhisarai, Suryagrapha, Begusarai and Nawada.

Surveys during the 2014 elections showed that similar to Delhi, voters in Bihar were aware of the subtle difference between national and state elections. Internal reports and anecdotal evidence from researchers indicated a preference for Modi at the centre, and Kumar at the state. This can now be corroborated by the fact that more than 30 assembly segments that the NDA won in 2014 by a margin of 10% or higher were captured by the MGB by a similarly high margin in 2015.

The BJP may also need to internally analyse its strategy for state elections. It seems that the BJP assumed that it won’t need to field a chief minister candidate in Bihar, because it had won Haryana and Maharashtra without any such leading figure, while the party had lost Delhi where it had put money behind Kiran Bedi.

But this one-size-fits-all approach is foolhardy. This demonstrates a reduced awareness of Bihar and its current political dynamics. Maharashtra and Haryana were anti-incumbency states, while Kumar is significantly popular within his core constituency of backward community voters and women

In the 2014 elections, a concentrated effort was made to hold Modi rallies in constituencies that were not easy to win. However, in 2015, the prime minister stuck to safe areas. Out of 26 rallies that Modi addressed on his own, 19 were conducted in traditionally favourable constituencies.

Also, while Modi’s presence was ensured in BJP-contested areas this time, his attendance in areas where the party’s alliance partners were contesting was neglected.

This was a strange strategy, especially because the idea was to project Modi as a member of the backward community. Greater presence in alliance-contested seats—which have significantly higher Dalit, OBC and EBC population—could have improved the NDA’s conversion rates drastically. As of now, the BJP converted only 12 of the 26 seats Modi conducted rallies in.

Two days before the third phase, the BJP raised questions on minority-based reservations. Two days before the fourth phase, a BJP leader made the “crackers in Pakistan” comment. Before the final phase, it released the controversial cow advertisements. These statements were intended to consolidate votes, and would have worked if the opposition had made it an agenda too. The Grand Alliance, however, stuck to themes of development and social welfare. In each phase, polling data shows that the JDU’s strategy to maintain message discipline, and not engage with the BJP on religious lines prevailed.

While the JDU ministers had a 73% success rate in being re-elected, it was very different for ex-ministers in the BJP: Of the five contesting, only two managed to be re-elected. In addition, if one looks at the top 30 margins of victory in 2010, five of the BJP’s major vote pullers lost this time around. So, not only did the JDU manage to consolidate its victories, they defeated known heavyweights in this election. 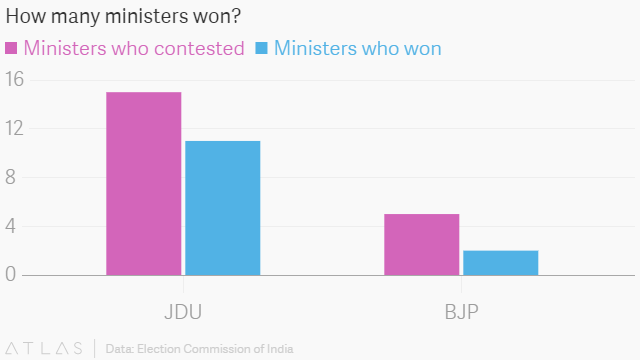 None of the above (NOTA)—option for voters unwilling to back any candidate—emerged as a significant option this state election. There were nearly 21 seats where the NOTA was greater than the margin of victory. Hypothetically, therefore, if NOTA did not exist then these votes received could have swung the election in these seats. Moreover, the volume of NOTA in this elections matches the number of votes received by NDA alliance partner RLSP, and in fact, beats previously supposed kingmakers such as the Communist Party of India, the Samajwadi Party, the Bahujan Samajwadi Party and the Nationalist Congress Party.

Our analysis also shows a higher incidence of use of the NOTA option in rural areas. But whether this is due to an error in voting, or a growing disaffection among rural voters, isn’t entirely clear.