By announcing his plans to give away 99% of his Facebook shares, Mark Zuckerberg has joined the line of many famous billionaires—including Warren Buffett and Bill Gates—who have pledged to use most of their wealth for philanthropy.

But, how do rich Indians compare?

India has a history of philanthropic industrialists. Old wealthy families such as the Birlas and Goenkas have for long donated to causes ranging from healthcare to education. In the last few decades, entrepreneurs such as Azim Premji and Anil Agarwal have surprised the world with their generosity. Premji, chairman of Wipro, decided to give half of his stake in the IT company to charity. Similarly, the London-based Agarwal who runs the natural resources conglomerate Vedanta, pledged 75% of his personal wealth to charity in 2014.

Taking a look at absolute numbers, Asia’s third largest economy doesn’t do too badly—at 165 million (pdf), the country has the highest number of people who donate to charity.

However, the Azim Premjis and Anil Agarwals are outliers rather than reflective of our inherent tendency as a country. Given the size of our population, we don’t have enough people donating. On a percentage basis, India is one of the least generous countries, ranking a lowly 106 in 2015 on the World Giving Index.

And this lack of charitableness cannot be blamed on the country’s poverty. When compared with other populous and developing countries—Indonesia and Brazil, for instance—India has the second lowest percentage of people donating. In this pool of countries, only China is worse than India in its generosity. 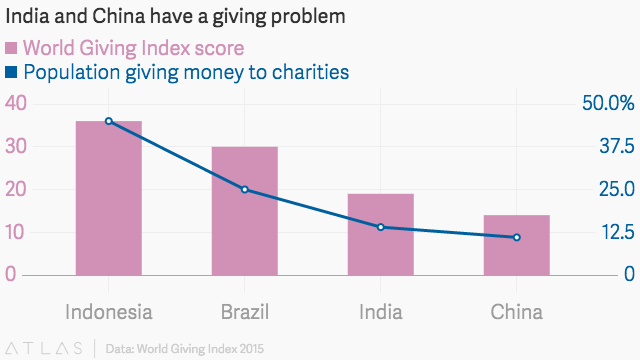 India also ranks far behind its South Asian neighbours on the generosity index. In Sri Lanka, for instance, a staggering 58% of its people donate money, followed by Nepal at 26%. 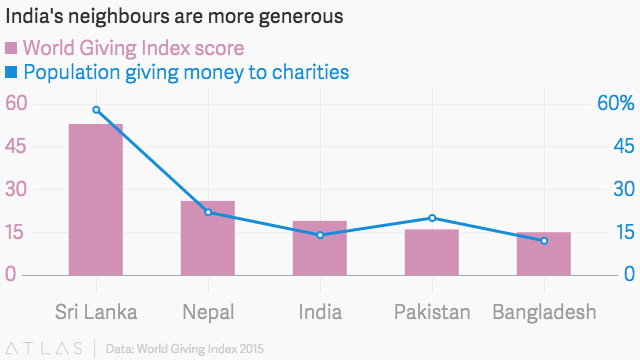 China and India have a giving problem, even though both countries have been generating massive amounts of wealth in the recent years. India has the third highest number of billionaires, at 97, while China with 430 stands second behind the US.

So, what do Indians do with all their money? While the global average of donors has risen in 2015, the total number of Indian donors has declined from 2014. 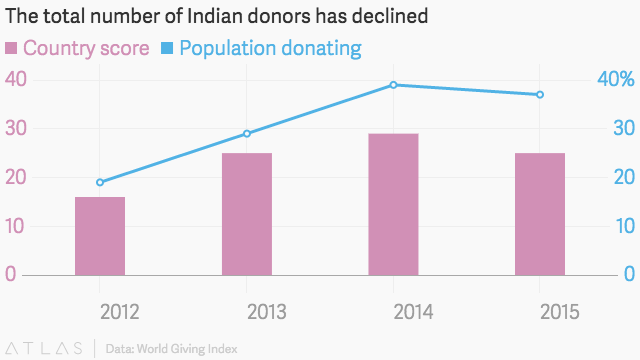 One reason for the drop in 2015 can be explained by the enactment of a new Companies Act, which mandates companies above a certain size to give 2% of their profits to charitable causes. With more donations being made through their companies, the Indian elite feels slightly less motivated to give back personally.

But the tendency to scrimp on charities is also more psychological. As per the recent Hurun Indian Rich List, nearly 61% of India’s billionaires called themselves self-made. Born in the pre-liberalisation era, this generation was raised in a poorer and more challenging India. These successful, first-generation entrepreneurs want to personally enjoy all the comforts their new wealth has brought them.

Growing up in a deeply unequal society motivates these newly-rich individuals to act differently from their western counterparts. Some leave for countries with better living conditions. In the last 14 years, for instance, nearly 61,000 Indian millionaires have left the country—second only to China’s 91,000 millionaires. Some of those who stay keep more for themselves and their next generation, not only by avoiding charities, but also by being creative with their tax structures. For a country with a high individual tax rate of 33%, India’s tax receipts don’t match its economic growth. At 10%, India’s tax-to-GDP ratio is far behind the global average of 15%, and an indicator of low development and high tax evasion.

Whatever be the case, it is clear that our elite needs to do more. We need more high net worth individuals donating to causes, building a more robust not for profit sector, to ensure that the successes of liberalisation are not captured by a few.

We welcome your comments at ideas.india@qz.com.