Last year, Narendra Modi laid claim to the most popular tweet by an Indian. The Indian prime minister’s triumphant message after the general elections was retweeted by more than 75,000 people.

In 2015, the honour belongs to Shah Rukh Khan. On April 17, the Bollywood superstar tweeted a selfie with British band One Direction’s former member Zayn Malik in London. With over 141,000 retweets—and nearly 18.3 million views— it was the most popular tweet by an Indian this year.

Khan is also the second most followed Indian on Twitter—trailing another Bollywood superstar, Amitabh Bachchan, according to a year-end round-up by Twitter.

Modi placed third on the list, having quadrupled his number of followers from four million in May 2014 (when he took office) to more than 16 million (and counting) currently. He is the biggest gainer on the top 10 list in 2015, according to data provided by Twitter. 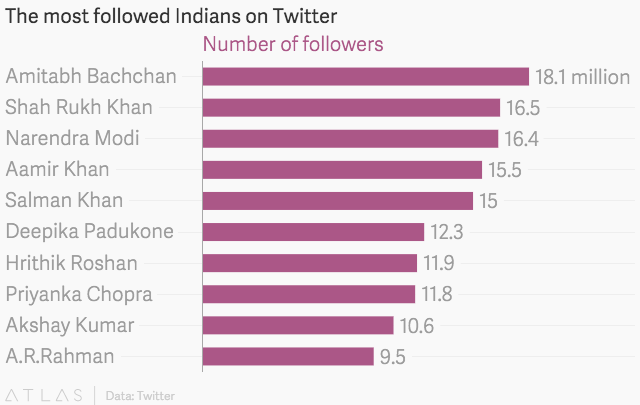 The Indian Premier League—with #IPL—was the most popular. The other four were Modi-led campaign #SelfieWithDaughter to promote the rights of the girl child; #BiharResults during the October-November period; Modi’s #SaalEkShuruaatAnek on his first anniversary as India’s prime minister; and #DDLJ20Years on popular Bollywood film Dilwale Dulhania Le Jayenge‘s 20-year anniversary.

There were five moments on Twitter, from news and politics to sports, political and cultural, that emerged as the most influential.

“Most influential are the topics that were the most conversed on Twitter. These moments had multiple hashtags, and they received the most number of tweets,” a Twitter spokesperson told Quartz. “Emojis, too, were part of the calculation for the most influential moments on Twitter.”

Here are the top five: