After years of muted activity in the initial public offering (IPO) market—due to a slowing economy and lacklustre demand from investors—2015 proved to be a banner year for raising capital in India.

This year, 21 companies launched IPOs, the highest in the last four years. The total amount issued—value of shares sold—by these firms was Rs13,559 crore ($2 billion), according to data provided by PRIME Database, a capital markets information provider. Last year, the amount issued through IPOs was a paltry Rs1,200.94 crore. 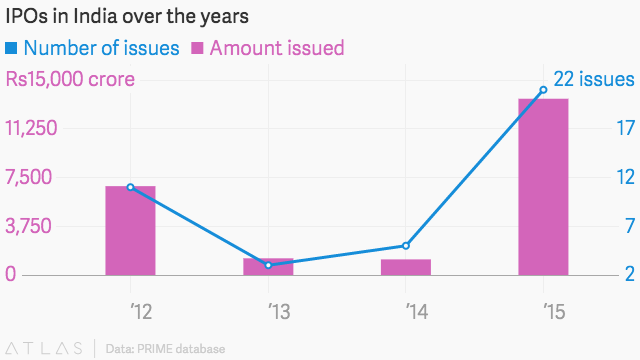 Investors and companies in India are encouraged by prime minister Narendra Modi’s promises for big bang reforms. The Sensex—India’s benchmark equity index—touched an all time high during the year, and foreign investors continued to remain bullish. In fact, among the emerging markets, India has been touted as the “most attractive” for investments.

“For most part of the year, there was a buoyancy in the secondary markets,” he explained.

Asia’s third largest economy is estimated to grow at 7-7.5% this fiscal year—the fastest globally. Although, much of this has to do with the revised computation of the gross domestic product.

The biggest IPO of the year was by InterGlobe Aviation, the operator of IndiGo—India’a largest airline by market share. The issue launched in October, and raised over Rs3,000 crore ($459 million). After it made its debut on the bourses in November, the market capitalisation of InterGlobe touched $5 billion, which made it the third-largest low cost airline in Asia, Bloomberg reported.

India’s largest cafe chain, by store size, too, filed its IPO in 2015. Coffee Day Enterprises, the company which owns the Cafe Coffee Day chain of cafes, hit the capital markets in October and raised Rs1,150 crore.

“There has been a lot of pent up demand over the years, when there weren’t many IPOs. Second, the PE  (price to earnings) multiples are also very high right now, and as a result valuations are very high making it the right time for companies,” Munesh Khanna, a partner at PwC India told Quartz.

The momentum in the IPO issuances is expected to continue. In fact, December itself saw three IPOs by companies in the healthcare and pharmaceutical sectors—Dr Lal PathLabs, Alkem Laboratories and Narayana Hrudayalaya.

“There is enough liquidity in the market, and a lot of it will depend on the overall sentiment too,” he said.

Already, 21 firms have received approvals from the Securities and Exchange Board of India (SEBI)—the capital markets regulator—to launch IPOs. These issues are worth Rs50,000 crore.