Giant e-commerce companies are finding that cash is still king in India.

Roughly half of Amazon customers in India pay for delivered goods in cash, creating a tricky logistical situation for the Seattle-based e-commerce company.

In many cases, thousands of local shops across the country serve as pick-up locations for customers to retrieve their orders, according to Fortune. In exchange for that service, Amazon pays out small commissions per package to the shop owners.

Not only does the cash-for-delivery model require significant investment to manage, it also leads to a higher return rate, said Kartik Hosanagar of the Wharton School at the University of Pennsylvania. That’s because a person feels less committed to the product until they’ve paid for it. When you click a buy button and money instantly leaves your account, there’s a greater sense of finality than when you have an item shipped, wait, and then pay with cash.

While not unique to India, the cash-for-delivery model reflects a larger financial reality in the country: Only about 60% of people have bank accounts, and even fewer have credit cards. Indian prime minister Narendra Modi has pushed a plan to provide every household with a bank account, but its success so far has been mixed.

The plan has led to the creation of more than 183 million accounts. That said, as of Jan. 6, nearly one-third carried a zero-balance, though that trend has been on the decline. 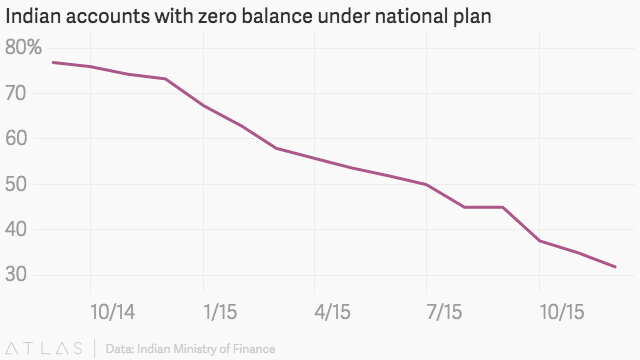 Meanwhile, Amazon is fighting for market share in an increasingly competitive landscape where it has invested more than $2 billion. Since launching in India in 2013, the company is the third largest online retailer in India, behind Flipkart and Snapdeal, with an estimated market share of up to 15%. But it’s faring better there than in China, where analysts say Amazon’s share of the e-commerce market is about 1.5%.

“They have learned from China and have avoided mistakes,” Hosanagar said. “The local consumer base in India is a lot more willing to embrace Amazon.”

And even if it isn’t the first company many Indian customers consider using, the next decade is expected to yield big growth for Amazon, said Deutsche Bank analyst Ross Sandler in a recent report. In an October financial release, Amazon reported third-quarter active customer numbers in India grew 230% year-over-year.