The dull numbers aren’t entirely unexpected. The quarter is typically subdued for the sector given the holiday season in the US and the UK. But, this quarter, there was an additional factor: last December’s catastrophic floods in the southern Indian city of Chennai.

“All our industry segments have exhibited growth in a traditionally weak quarter additionally accentuated by the impact of the Chennai floods,” N Chandrasekaran, CEO and managing director of TCS, said in a statement.

Chennai, which houses some of TCS’ largest delivery locations, with over 65,000 employees, received its worst rainfall in a century in the first week of December 2015, leading to massive flooding. The Associated Chambers of Commerce and Industry of India, an industry body, estimated the overall loss from the flooding at over Rs15,000 crore ($2.25 billion).

In a regulatory filing on Dec.11 (pdf), TCS had warned the floods would have a “material impact” on its revenue. Most of the work at TCS’ facilities in the city was halted between Dec. 1 and Dec. 7.

This is the sixth consecutive quarter when TCS’ revenue has lagged analysts’ expectations, moneycontrol.com reported. Here’s how the company performed over the last six quarters: 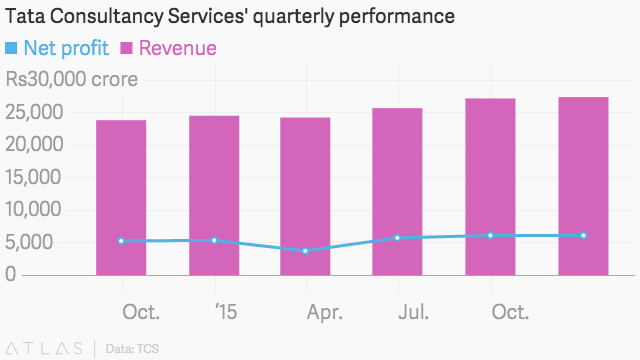