On the last day of 2002, the stock of PI Industries—an Indian agri-inputs and chemicals company—was worth Rs0.56 a share, making it a penny stock. Fast forward 13 years—and boom!—the scrip is now worth over Rs650.

That is a return of more than 100,000%. Here is the stock movement since 2002. The stock prices are not adjusted for stock splits. 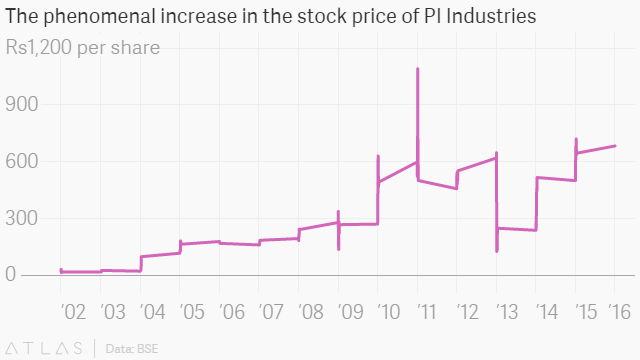 This kind of increase is unusual not only in India, but also for Asia. This growth streak is the longest among Asian companies with market capitalisation of more than $250 million, Bloomberg reported on Jan. 14. The only other firm that matches this increase is Nestle Malaysia Bhd.

An email sent to the company by Quartz, asking about the increase and outlook, remains unanswered.

PI Industries was incorporated in 1947, and has five facilities across Jammu & Kashmir and Gujarat. Its revenue has been steady. One reason for this is the company’s agri-inputs business, which makes agro-chemicals, speciality fertilizers, plant nutrients, and seeds.

Despite a weak monsoon, the company performed well compared to peers, according to a December report by Cholamandalam Securities, a brokerage. The note added:

It has been a challenging year for agri-input companies, due to deficit South-West monsoon and lower cotton acreage. Despite challenging environment, PI’s domestic agri-input business grew 9% in the first half of the 2016 fiscal, outperforming the industry by a wide margin which reinforce the product strength. 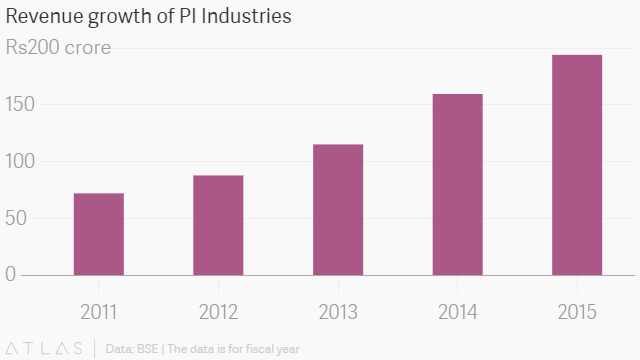 Meanwhile, the company has also been deleveraging itself, making it an attractive bet for investors. A lower debt burden gives way for better dividend opportunities as the cash flow can be used to pay back investors, instead of servicing debt. As of March 31, 2015, PI Industries had a debt of Rs81.46 crore, down from Rs214.27 crore in 2011.

Now, with over 1,400 employees, the firm wants to expand and grow the number of orders the company gets.

“We are confident that we will be able to grow our order book from $650 million at a steady clip,” Mayank Singhal, managing director of PI Industries, told Bloomberg.