For two years, Tata Motors did not have a CEO. Its last chief executive Karl Slym died under mysterious circumstances in Bangkok in January 2014.

Since then, India’s largest automobile manufacturer has struggled to turn around an already struggling business. Sales—of both passenger and commercial vehicles—have floundered, and its market share has tanked.

Today, Tata Motors is only the sixth largest car maker in India by market share. Only Jaguar Land Rover, the company’s European luxury car unit that it bought in 2008, has kept the flag aloft.

On Jan. 18, the 81-year-old firm finally appointed Guenter Butschek, an Airbus and Daimler veteran, as head of its operations in India and other developing markets such as Thailand, Indonesia and South Africa. These are countries where Tata Motors has been trying to make its presence felt.

“Tata Motors is going through an exciting yet challenging phase, and Mr. Butschek’s appointment comes at an opportune moment. He brings with him the rich global experience of growing organisations and developing new markets,” Cyrus Mistry, chairman of Tata Sons, the parent company for Tata Motors, said in a statement (pdf).

Butschek, 55, was previously the chief operating officer at Airbus, where he focused on industrial strategy, global operating systems, supply chain, and new launches. He quit the European aircraft maker in December 2014, Tata Motors said in the statement.

Within the automobile industry, Butschek is known for his ability for turning around units and restructuring them to improve productivity and profitability. That recognition is largely due to a three-year tenure as president and CEO of Netherlands Car B.V., a joint-venture manufacturing facility between Daimler and Mitsubishi Motors Corporation. In all, Butschek spent over 25 years at Daimler.

And those skills are certainly something the Indian automaker urgently requires.

“The automobile industry in India is going through a period of uncertainty,” Abdul Majeed, a partner at consultancy firm PwC, told Quartz. “There are changes in mobility, with Uber coming in, and in the purchasing trends. What Tata Motors badly needs is a person who can drive strategy on a variety of areas, including sales, distribution, and after-sales, among others. Certainly, having a person in charge helps.”

Butschek is likely to take charge at the Mumbai headquarters by February. But he might not have an easy task at hand.

For one, Tata Motors has to reclaim lost ground. Homegrown carmakers such as Maruti Suzuki and Mahindra, besides international brands like Hyundai, Toyota, and Honda, have taken over India’s domestic passenger vehicle segment. Between them, these companies control more than 80% of the passenger car market.

“Tata Motors, as a company is currently on the fringes of mediocrity and Indian customers don’t even look at the company as an option anymore while purchasing cars,” Deepesh Rathore, co-founder of Emerging Markets Automotive Advisors, a global automobile forecasting company, told Quartz.

“It is definitely good news that the company has a new CEO, but I am not certain how that is likely to help. It has taken the first step towards a mile, but it has so many more steps to take now.”

The company’s launches in recent months have also failed to excite Indian consumers. And the strain has now begun to show on financials with the firm posting losses in five of the past seven quarters. During the July-September quarter of 2015, Tata Motors’ loss stood at Rs287 crore ($42 million). Its hold over the commercial vehicle segment, of which it controlled more than 50% for years, has also waned. 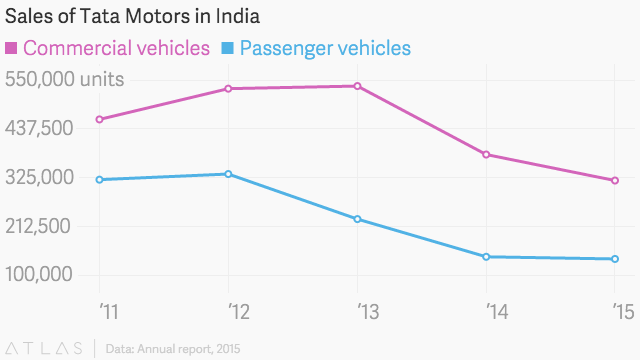 “If you justify the decline in market share of the commercial vehicles by suggesting a downturn in the economy, how come some of the other truck makers improved their market share?” Rathore said. “Tata Motors is in dire need of some fundamental changes, and the biggest problem is the company’s style of functioning. Hopefully, the new CEO will be able to bring changes to those practices.”

And with star footballer Lionel Messi as its new brand ambassador, the playground is all set for the automaker. Over to you now, Butschek.