India has one of the most hostile environments in the world for driving innovation.

Asia’s third-largest economy stood 54th in a recent ranking of 56 countries on the basis of how their domestic policies support global innovation. The report (pdf) by the Information Technology and Innovation Foundation (ITIF), a technology policy think tank, includes countries that make up close to 90% of the world’s economy. This is the first time ITIF has compiled such a report.

Here are the top and bottom five countries on the basis of how supportive their policies are for innovation: 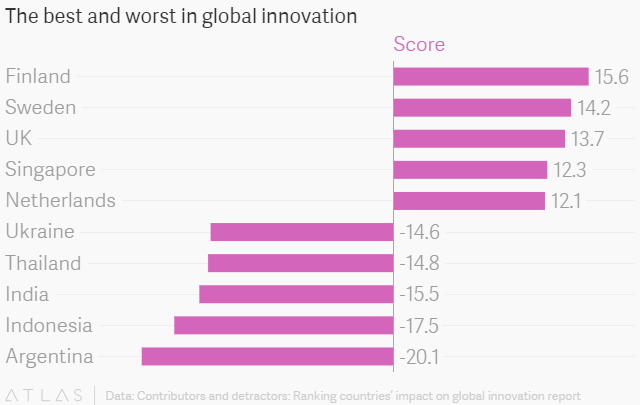 “Thailand, China, India, Argentina, and Russia field policies that detract the most from the global innovation system. These countries make the most extensive use of trade barriers and other distortions while providing weaker environments for intellectual property protection,” the report said.

It examined 14 factors that favour domestic innovation and have a global impact, such as supportive tax systems and investment in research and development (R&D) and human capital. It also assessed 13 other factors—like forced localisation and weak intellectual property protection—that have negative effects on global innovation.

India is on top of the list of countries ranked on the basis of its generous R&D-related tax incentives. However, it lacks innovation because it lags in other areas such as collaborative R&D tax credits (offered on expenditures made to support research at universities, national labs, and research consortia), and encouragement to commercialise innovation, rather than just for the research.

“In India, for every Rs100 of private sector expenditure on R&D, a firm can receive a tax credit of Rs44,” the report said. Eighteen of the 56 countries included in the report offer no R&D tax incentive. Meanwhile, the Indian government spends $464 (Rs31,600) per capita on R&D—higher than 18 other countries named in the report.

Here are the top and bottom five countries based on spending per capita on R&D: 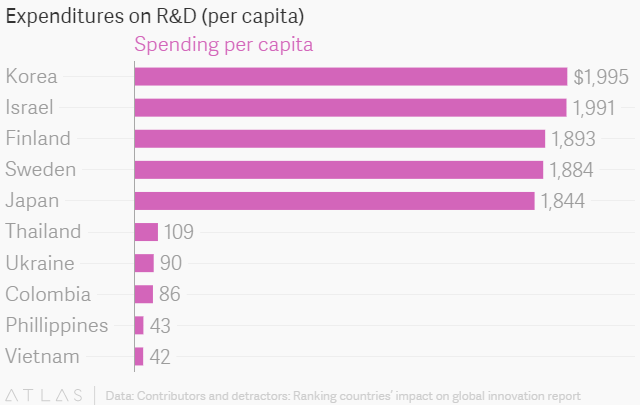 India does better than others when it comes to corporate tax, too. The effective corporate tax rate in India is at 26.8%, according to the report, lower than Austria, Mexico, the US, Germany, Italy, and Japan. 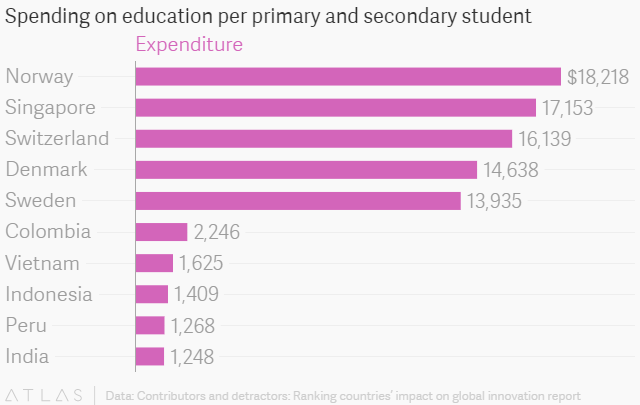 However, India is somewhere in the middle when it comes to countries with top-ranking universities. At 25, India is ahead of countries such as Argentina, Brazil, Poland, and Kenya, with 17 of the top 800 world-ranked universities, the report said, without naming the institutions.

Still, the number of researchers in the country stands at a paltry 15 per 100,000 people, placing India among the bottom five in this category. India is also among the bottom six countries on the rankings when it comes to total citations—an academic document that is referenced by subsequent academic research—per 1,000 citizens.