With roughly a fifth of the world’s population but only 12% of its internet users, India remains a curious case for e-commerce companies looking to tap into the rapidly-developing market.

For one, more than 50% of Amazon’s Indian customers still use cash for online purchases. That’s created a complicated logistics situation in which a constellation of local shops serve as both payment center and pick-up spot for online goods.

But with Amazon’s announcement Tuesday (Feb. 16) that it intends to purchase Indian online payments firm Emvantage, the company looks to be turning to the mobile phone as a key part of its strategy to gain market share. Emvantage gives Amazon the technological foundation to make online shopping more convenient with services that include a mobile prepaid wallet, which could cut the dependency on using cash when making online purchases. The Seattle-based e-commerce giant did not disclose the price of the deal, and Amazon India did not immediately respond to a request for comment.

I think Amazon is playing a little catch up.

The purchase may be a sign that Amazon learned from its experience in China, where competitor Alibaba developed its Alipay service, and JD.com partnered with Tencent to use its WeChat mobile services. WeChat, for example, has 93% penetration in its major cities where users can use the app for online shopping, ordering taxis, paying bills, finding dates, and much more. 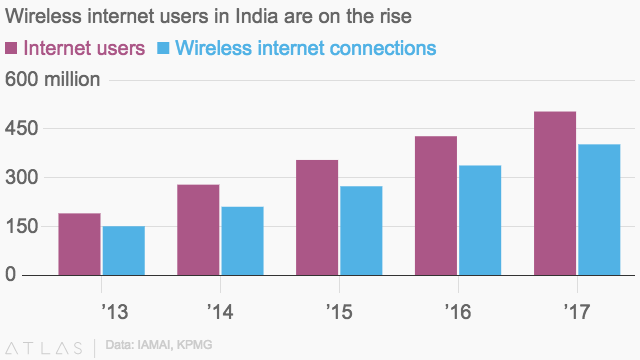 In India, Alibaba is already making moves in the mobile-shopping market by investing in Paytm, a popular mobile platform that works much like PayPal. Amazon’s purchase of Emvantage could be a crucial move for Amazon to gain ground in mobile payments, said Kartik Hosanagar, of the Wharton School at the University of Pennsylvania.

“I think Amazon is playing a little catch up,” Hosanagar told Quartz.

The purchase of Emvantage also makes sense when looking at data on internet and mobile phone use in the world’s second most populous country. According to the World Bank and the Internet and Mobile Association of India, the number of Indians with mobile phones outnumber those with personal computers.