Finally, there is hope on the horizon for India’s perennially loss-making airline, Air India.

On March 15, the Narendra Modi government announced that the state-owned airline is set to make an operating profit during the 2016 fiscal—the first time in nine years. Often accused of wasting taxpayers’ money, the improved financial performance is expected to bring some respite from years of negative publicity.

Much of the turnaround may be attributed to plummeting oil prices which hit a record low in the past year. Crude oil prices account for more than 50% of the operating cost of airlines in India.

“Air India is expected to earn an operating profit of Rs8 crore as compared to the operating loss of Rs2,636.18 crore in the previous year. This is the first time that the company is going to achieve operating profit since its merger in 2007-08,” India’s junior minister for aviation Mahesh Sharma said in parliament on March 15.

In what is now believed to have been an ill-timed move, the government had fused Air India—an airline flying internationally—with domestic carrier Indian Airlines in 2007, creating a bigger entity, the National Aviation Company of India Ltd (NACIL).

Both Air India and Indian Airlines were making losses at that time, bleeding Rs541 crore and Rs240 crore, respectively, in 2007.

The merged company had more than 30,000 employees—256 per plane—in 2007. This was twice the global standard. Air India spends almost one-fifth of its revenue on employee pay and benefits while other airlines such as Jet Airways spend about one-tenth. Since the merger, NACIL has tried to cut costs. Its employee-to-aircraft ratio stood at one to 120 in 2015, which is still more than the global average of one to 100. 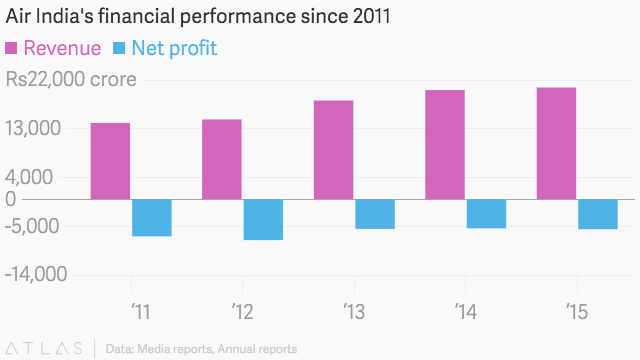 Besides, the 2008 global economic collapse threw operational expenses out of gear when oil prices skyrocketed. As more private airlines took to flying on routes that once belonged to Air India, business plummeted.

So far, the Indian government has pumped in more than Rs30,000 crore into stabilising the airline. As of December 2015, its debt stood at over Rs50,000 crore.

But the 85-year-old Air India has been steadily losing market share to rivals such as IndiGo and Jet Airways. As of January 2016, Air India’s share in the pie stood at 16% compared to over 35% at the time of the merger.

Over the past few years, the country’s aviation industry descended into a deep mess with only two airlines making profits in 2015. At least two carriers—Kingfisher and Paramount—shut shop in the last six years due to the crisis. Kingfisher Airlines is battling multiple suits, including one against 17 Indian banks trying to reclaim their money.

Of course, much of that had to do with falling oil prices. In 2015, the benchmark Brent crude oil fell by 35%. For companies such as Air India, this provides an opportunity to stabilise operations.

Only about 2% of the Indian population currently travels by air. Airbus, the world’s second largest aircraft-maker, believes India’s civil aviation industry will grow by over 9.5% in the next 20 years. That’s an opportunity Air India wouldn’t want to let go off.

It is likely that 2016 could be the year that redefined Air India.