At a time when newspapers across the globe are dying, India’s Rs30,000-crore ($4.48 billion) print media industry is set to grow by 8% annually for the next three years. The growth driver, though, isn’t English language dailies. It is regional media.

Vernacular or local language print media will grow at 10-12% in fiscal 2017, according to a report by India Ratings and Research, a credit ratings agency and a unit of Fitch Ratings. This growth rate will be higher than that of the English language print media, it said, without specifying exact numbers.

Vernacular newspapers and magazines will “overshadow the English print media, which is likely to continue facing headwinds from the growing acceptance of digital media content,” the report, released on March 14, said. 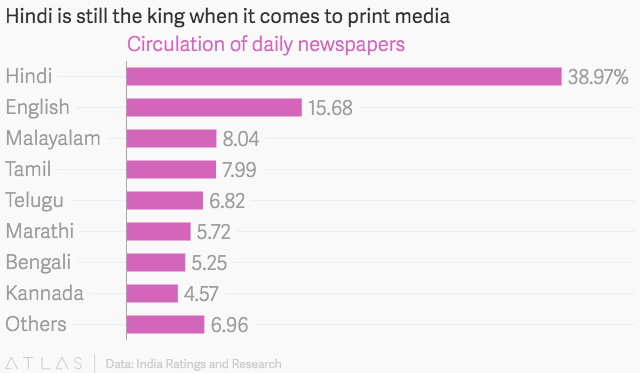 Only 10% of the 1.2 billion Indians speak English. That leaves an overwhelming majority to rely on regional media. So there is still a huge untapped market. Additionally, literacy rates in the country’s villages are improving. The figure for rural areas jumped from about 45% in 1991 to 69% in 2011, according to the latest Census of India.

The India Ratings report also says that the circulation revenue among vernacular print media is estimated to grow 8-10% in the 2017 fiscal. This will primarily be because of a rise in circulation along with prices.

Additionally, the costs for these media companies are slated to come down as global newsprint prices remain benign, increasing profitability. Newsprint or the printing paper accounts for 40% of the total costs of dailies, the report said. 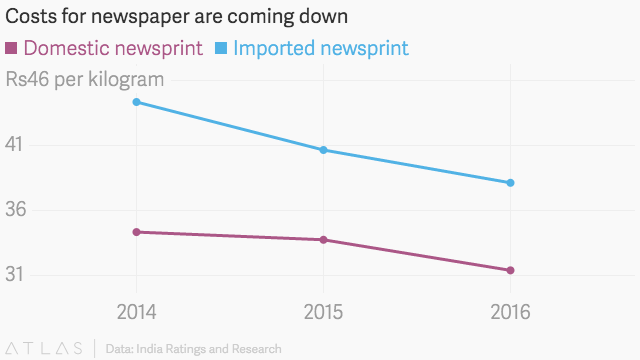 Meanwhile, advertising revenue, the biggest source of income for newspapers, is slacking. Subscription income is usually a fraction of the total revenue. Corporate ad spends depends largely on GDP growth.

According to India Ratings, e-commerce will be the “major growth driver” in advertising spends. Rural consumers are already the next big opportunity for India’s online sellers. “E-tailers and online platforms such as Flipkart, Snapdeal, Amazon, Quikr and Olx (will) spend for ad spaces across mediums,” the report said.

India’s e-commerce sector is set to grow by whopping 65% in 2016, hitting revenues of $38 billion (Rs2.5 lakh crore), according to Assocham, an industry body.