On March 22, millions of Indians should take note of the acute crisis Asia’s third largest economy faces. More than 76 million Indians—almost the entire population of Turkey—don’t have access to safe water. Over 140,000 children die due to diarrhoea in the country every year, caused by unsafe water and poor sanitation.

The problem is only set to worsen, according to the 2030 Water Resources Group—a consortium of consultancies such as McKinsey, the World Bank Group, and corporates, including Coca-Cola, Nestle, Standard Chartered, and SABMiller, among others.

“The gap between freshwater demand and supply could be 755 billion cubic meters by the year 2030 if business-as-usual water management practices were to continue,” the group said in a report last year. “Given this situation, it is imperative to drive water use efficiency, especially for irrigation, if water scarcity is to be prevented in the future. “

If all that wasn’t enough, data from the country’s 69th National Sample Survey Organisation (NSSO, pdf) shows that of every 1,000 households in the country, only 858 rural and 896 urban households have access to sufficient drinking water. The data was collected during July-December 2012 in this round. 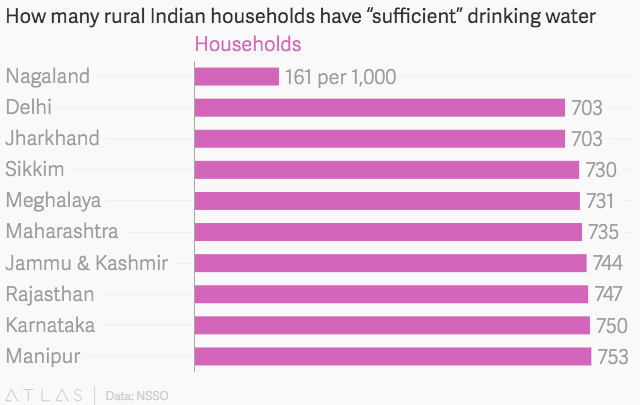 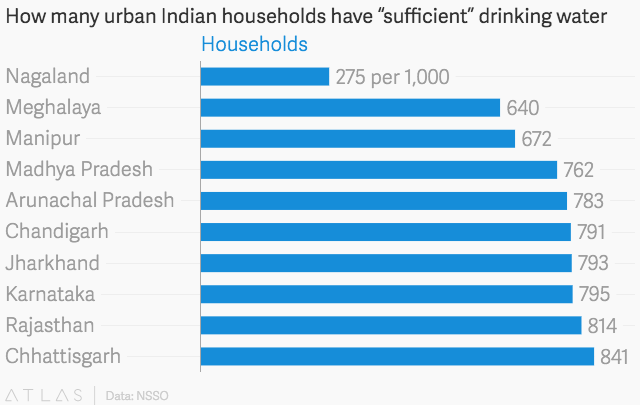 Not all households in India have access to water inside their homes. For their daily needs, people in rural areas often have to rely on wells or lakes located far away from their homes. The following chart shows the number of households per 1,000 who have to travel anywhere between 0.2 kilometres and 0.5 kilometres to get water. These are the states with the highest number of households who need to travel that distance.

Meanwhile, across India, women outnumber men when it comes to fetching water. In rural areas, 841 households per 1,000 have reported that women go out of the house to get water. India’s hinterlands often require women to walk long distances—be it for drinking water or for other household chores. Here is the data in this regard from the 69th round of the NSSO.

Such dependence on women has led many men to turn polygamists. For instance, in the western Indian state of Maharashtra, where some 19,000 villages had no access to water, men have married up to three times to ensure that his household gets enough water.

“I had to have someone to bring us water, and marrying again was the only option,” Sakharam Bhagat, a farmer, told Reuters last year. “My first wife was busy with the kids. When my second wife fell sick and was unable to fetch water, I married a third.”