For much of Germany’s Autobahn, the federally-controlled highway system, there are no speed limits. But for how much longer?

When the upper limit was suggested at 130 km/h or 100 km/h, the level of support dropped. Only 11% of Germans would be in favor of implementing a speed limit similar to the UK’s, which is 112 km/h, while 40% of respondents were interested in implementing France’s current limit of 130.

While most countries across the world have imposed upper speed limits, Germany is among a small number of countries, including Afghanistan and North Korea, not to follow suit. According to European Transport Safety Council (ETSC), 52% of the German highways don’t have speed limits. Only 33% have permanent speed limits.

Older drivers were far more likely to be in favor of lower limits, with half of those over 55 supportive of a 130 km/h nationwide limit, compared with just over a third of 18-to-24-year-olds. The survey interviewed 1198 people from Oct. 9-13.

Road deaths on highways have been steadily decreasing across Germany, but are still higher when compared to France and the UK. This could be simply down to the differences in standards of driving, number of highways, or quality vehicles between these countries—but of the 645 road deaths on German highways in 2006, the ETSC found 67% of these deaths occurred on motorway sections without speed limits. 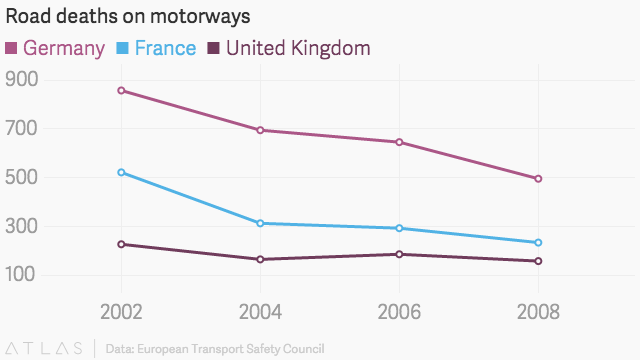 In the last few years, the issue of speed limits has intensified in Germany. Sigmar Gabriel, the chairman of the Social Democratic Party, proposed a speed limit in the run-up to the last elections but many politicians, including chancellor Angela Merkel, heavily opposed the move.