Despite recent strong economic growth Nigeria has struggled with chronic electricity supply problems. In November 2013, major reforms in the power sector resulted in privatization of government-owned infrastructure in particular the power distribution companies.

The hope was that the entry of investors into the sector would improve power generation and distribution across the country and perhaps reduce Nigerians’ reliance on private generators which cost three times as much as direct supply. But just over two years later, the sector now faces a major setback as investors are threatening a pull-out. Their reason: government’s failure to adhere to contractual terms. 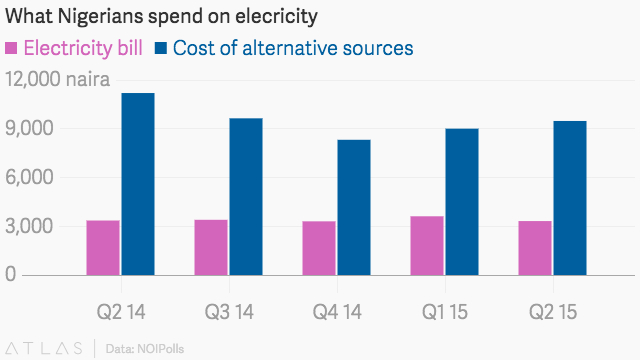 The investors argue that the government’s inability to meet its contractual obligations have made it impossible to deliver on providing electricity supply. They are now requesting refunds on their commitments which are pegged at more than $130 million since 2013.

Among the reasons for the threatened pull-out from the sector is a backlog of debt totaling $226 million incurred by government agencies. The investors claims government offices as well as the National Assembly and the military bases have not paid their electricity bills since the privatization of the sector in 2013.

Another reason is a controversial tariff increase which they claim could wipe out profit margins. From next month, the Nigerian Electricity Regulatory Commission (NERC) will introduce new electricity tariffs which will replace fixed charges as  power users will only pay for electricity they consume. In the past, the fixed charges were applicable irrespective of usage but the new tariff system will see increases in energy charges instead. Power investors have described the new tariff as ‘not-cost reflective’.

Power remains a major impediment to growth in Nigeria. Producing only 4,000 megawatts, the country’s possible deficit is as high as 156,000 megawatts. To make up for the difference, the government is turning to solar energy which it is betting on to provide electricity to a million households in the next five years. Despite its prospects, solar energy will only provide minimal respite with as many as 90 million Nigerians possibly living without electricity.