To many, Finland is a member of the euro zone’s fiscally conservative core, alongside Germany. But in the words of its own finance minister, “basically, we are the sick man of Europe.”

Indeed, new statistics show just how lousy Finland is performing financially. The Finnish economy is 11% smaller than its 2008 peak, making it look more like Italy or Spain than the stronger “core” countries of the euro zone. According to the latest monthly estimates, Finland’s economic output shrank by a daunting 2.6% in September versus the year before, the worst result in more than two years: 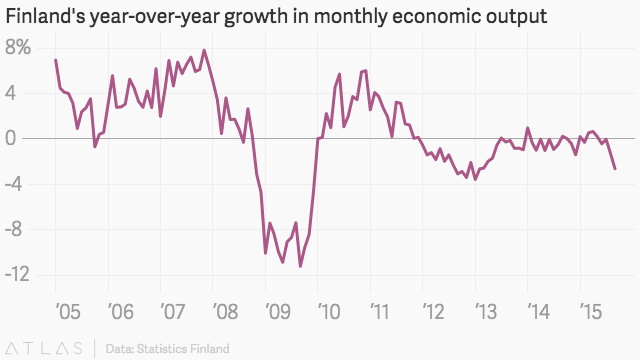 This implies that Finnish GDP has shrunk in 12 of the past 14 quarters, a brutal and long-lasting recession.

How did the Nordic nation get so sickly? The decline of Nokia has hit Finland hard (pdf)—at its peak in the early 2000s, the mobile company accounted for some 4% of Finnish GDP and around 20% of the country’s exports and corporate tax revenue. The travails of Finland’s large paper industry in an increasingly digital world are another drag on the economy. The EU’s recent sanctions against Russia, a key Finnish trading partner, have added insult to injury.

Finland has also recently added political instability to the mix, with a shaky, three-party coalition government nearly collapsing this month over austerity and cost-saving reforms. The biggest strike in decades brought Finland to a standstill in September, with workers resisting government efforts to boost the country’s flagging competitiveness. On current evidence, things are going to get worse before they get any better.