The reign of the consumer magazine—glossy, beautiful, and once a ubiquitous presence atop living room coffee tables around the world—seems to be quietly crumbling.

Print books are making something of a comeback right now, thanks in part to the rise of coloring books and a swelling public interest in children’s literature. Newspapers, catering to hyper-local communities, are faring pretty well, too. In fact, according to a new report from global consulting firm McKinsey, every category of media—from cinema to educational publishing to video games—should see an increase in consumer spending in the next few years.

Every category, that is, except magazines. 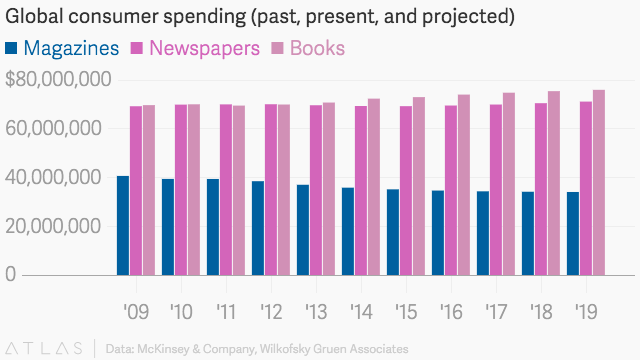 Global spending on media as a whole will rise 5% every year for the next five years, McKinsey predicts. But the market for both print newspapers and magazines is likely to wane, as interest in digital media takes over. While such a decline will not necessarily be industry-ending—”We believe that many of the people likely to abandon print newspapers and print consumer magazines have already done so,” McKinsey says—it will still have a real effect, leaving publishers scrambling for sustainable profits and new revenue channels.

Why, though, are print newspapers predicted to take much less of a hit than magazines? Part of the answer could lie in newspapers’ gaining expertise in marrying regular print content with supplementary digital content. This strategy doesn’t work so well with magazines, which tend to offer longer-form thought and commentary—not quick updates on the news.

There are also enormous costs and risks involved with magazine operations—especially new ones that see tepid consumer interest. In the US and Canada, 35% fewer magazines were launched this year than in 2014, highlighting both the difficulty of getting a magazine off the ground and the growing understanding that magazines are unlikely to be profitable. When Condé Nast decided to shutter the beloved Details magazine last month, its explanation was short and simple: “It’s been tough.”

Only time will tell whether consumer magazines can cling to their audiences in 2016 and beyond. Other forms of media have it much easier, according to McKinsey: Video games, for example, are on track to see more than 100% growth in consumer spending between 2009 and 2019.